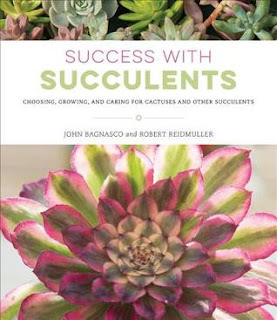 Success With Succulents is a very colorful, well photographed guide to choosing and successfully growing a broad range of cacti and other succulents. Released 5th Dec, 2017 in paperback format from Quarto - Cool Springs Press, co-authors John Bagnasco and Bob Reidmuller, Jr. have between them many decades of plant and gardening knowledge which they generously share in this easy to read and well presented book.

One of the dangers of gardening books is that there's a temptation to concentrate on only the newest and most popular cultivars, making the info in the book seem outdated quickly.  That's not the case here and although there are a number of gorgeous new cultivars highlighted and described, there's a solid basis of good tried-and-true general advice for getting the best performance out of and succeeding with any succulents.

The book has an easily read, accessible format.  A short introduction is followed by a botanically correct (worded in layman terms) definition of the terms cactus and succulent, the difference between spines, thorns and prickles, and also covers the ranges, culture and habitats of the various members of the succulent family.  All of the text is accompanied by really detailed macro photography which explain and support the text.

The next two chapters (totaling about 50% of the book's content) concern the culture and growing of succulents outdoors and indoors.  The book covers choice, placement, uses and culture for a wide variety of different plants.  With the emphasis on careful use of water and other precious resources, xeriscaping has a rightful place in garden design and the authors do a masterful job of presenting both the challenges and benefits of choosing the right plant for the desired use.

The table of contents includes a well indexed list of 100 featured plants representing both the classics and newer selections and covering a very broad range of styles.  There's a complete alphabetical index at the end of the book which also includes conceptual and gardening terms.

My only gripe, and I do freely admit that it's a trivial one, is that the authors use 'cactuses' instead of 'cacti'. This is clearly a conscious choice (and indeed, even a search of Wikipedia shows that 'cactuses' is a perfectly acceptable plural form along with 'cacti' and 'cactus').    They use the term consistently, so stylistically it isn't a problem. It's just a case of 'po-tay-to' 'po-tah-to' and I'm on the wrong side of the fence.

In all seriousness, it's a very well written, beautifully photographed gardening book, full of good solid advice for succeeding and growing these fascinating plants well.

Disclosure: I received an ARC at no cost from the author/publisher.
at January 14, 2018