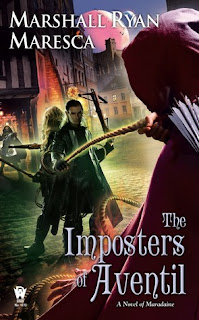 The Imposters of Aventil is the third in a trilogy-tie in in the world of Maradaine by Marshall Ryan Maresca on Penguin's DAW imprint.
High fantasy world, young ensemble cast, mystery and mayhem.  It might be formulaic, but it's great going down, easily digestible and keeps everyone coming back for more.  The action is nonstop and well written.

It fits in the slot left by 'what happened next' to Harry and co, but honestly, Mr. Maresca is a better writer than J.K. Rowling was (at least at the beginning of her career).  He's a gifted storyteller and has the technical chops to write snappy dialogue and action which doesn't fall flat.

Take a bunch of college kids at a local magical+ university, add one vigilante trainee mage outsider (the Thorn) with a heap of past history on a quest to take down the local drug pusher kingpin, toss in a lookalike bad guy running around killing people to everyone up in arms and hunting the Thorn, and stir in a pair of semi-scary FBI equivalents who are VERY interested in sorting out the fallout before the smoke clears.

I enjoyed the heck out of this novel.  I read it as a standalone, and did follow everything which was going on (another technical coup to the author) without any trouble.  I read the other books in the series as a follow-up and do recommend reading them in order if possible.  The series fill in a great deal of detail and nuance for one another.  Reading the follow ups, I had a fair number of 'aha!' moments.

The book is a hefty 400 pages, but the action and plotting pulled me along. It was a fun, undemanding, well written fantasy, thoroughly enjoyable.

Four stars, nonstop action, magic and excitement.
Disclosure: I received an ARC at no cost from the author/publisher.