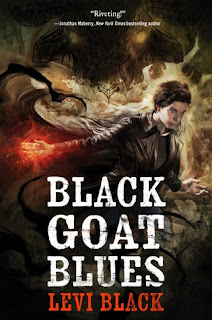 Black Goat Blues is the second book in the Mythos War series by Levi Black. I read this book out of order as a standalone and was immediately drawn into the story and wound up reading it in one sitting. After finishing it, I sourced the first book and am looking forward to reading it as soon as I can.

This is a Lovecraftian horror urban fantasy with all the trimmings.  There are elder gods aplenty, machinations, revenge, crazy (extremely creepy) cultists, a brooding atmosphere which explodes into action, and there's even a backwoods horror filled semi-homage to classics with a 'Deliverance'/'Chainsaw Massacre' vibe.  The protagonist is a wonderfully flawed character with a serious attitude and an unswerving mission.  She (yes, she's female) is deeply vulnerable and nevertheless badass.  She walks around in a flowing semi-sentient black leather coat made from the flayed skin of a fallen angel.  She winds up collecting and inspiring a 'crew' on her stated mission to track down and kill her former mentor, Nyarlathotep, a.k.a. The Man in Black.  Her crew includes a skinned hell-hound originally sent to hunt her down, a damaged young man bent on personal revenge who is accidentally sucked into her world and the goddess Ashtoreth.

This book is powerfully written.  The dialogue is machine gun fast and pitch perfect.  The writing is spare and electric.  It's literally nonstop taut creepy action for 288 pages.  The denouement is satisfying and inevitable and left me really wanting to read the next book in the series.

I'm generally not a huge fan of horror.  I make an exception for Lovecraft pastiches and I'm so glad I did.  This is high octane stuff; extremely well written.

Disclosure: I received an ARC at no cost from the author/publisher.
at January 14, 2018