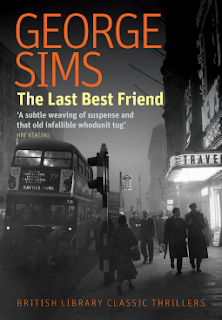 George Sims, (1923-1999) has been referred to contemporaneously and posthumously as a prodigiously talented writer of noir, memoirs and gritty realistic mystery/thrillers.  He was also an antiquarian bookseller in real life and wrote about his acquaintances and acquisitions in the rare book trade.  His writing garnered praise from a host of fellow writers and this particular book, The Last Best Friend, was included in H.R.F. Keating's list of '100 best books'.

The Last Best Friend (title taken from a poem by Robert Southey) begins abruptly with the falling death/suicide of Sammy Weiss, best friend of the main character, Ned Balfour. Ned, who is an antiquarian/rare book seller, is out of the country at the time, but immediately travels back to London to investigate.  Sammy was extremely acrophobic and Ned can't get his head around the idea of him intentionally committing suicide in such a way.

I was immediately struck by the quality of the writing.  Technically flawless and gripping, the author manages to write two simultaneous scenes at the same time without detracting from either one, and also without being confusing in the slightest degree for the reader.  The writing is very simple and pared-down. Sims was a master of 'show, don't tell'.

I devoured this book in one sitting and immediately reread it (and noticed a lot of things which I had missed on the first read-through).  Wonderfully written with a solid plot and dialogue that is pitch perfect. A lot of reviews mention 'swinging 60's London', but apart from mentioning place names, the setting and time period weren't really central to the plot line.  It didn't read as terribly dated as one might expect from other novels of the time period (compared to, for example, John Creasey (who is one of my secret passions - love his books, too)). I really admire that Sims never puffs up or shows off his writing.  The descriptions are well rendered but not overly so, the characters are believable and the dialogue is spot on.  There are, admittedly, some quotes which are dated ("He looked like a homosexual of the rare, vicious kind") and jarring (along with some *cough* relatively innocent(?) misogyny), but in general, the book reads well to a modern audience.

This is an author who deserves a much wider readership.  For fans of Ross Macdonald, Mickey Spillane, Ed McBain and company, Sims, though certainly less famous (and British), will fill the bill nicely.

Originally released in 1967, and republished in all formats Nov 7th, 2017 by Poisoned Pen, with a new introduction for this edition by Martin Edwards.
Five enthusiastic stars