The Curious Affair of the Witch at Wayside Cross 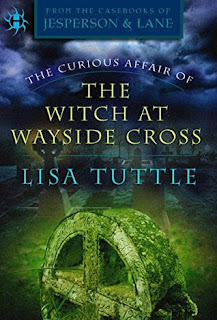 The second book in the Jesperson & Lane casebooks, The Witch at Wayside Cross nevertheless works well as a standalone.  The author, Lisa Tuttle, is a prolific and entertaining writer.  The series is marketed as a Victorian paranormal mystery series, but apart from a single strange subplot (basically a few pages), this book at least is very much within the scope of realistic murder mystery.

The book does have a fairly odd 'vibe', and the central plot line concerning the establishment of a school to educate and research pre-Christian belief systems in the British Isles, isn't the usual fare for more traditional Victorian murder mysteries.  The oddness persisted for me throughout the book and I found myself wondering about the behavior of several of the characters (Mrs Reverend Ringer for example... odd doesn't begin to cover it).

The writing on the whole is adept and the plotting works pretty well. There are quite a number of interwoven subplots which are resolved satisfactorily by the end of the book.  I do have some caveats, however.  The two titular characters (Jesperson & Lane) are refreshingly free from romantic entanglement with one another (and I hope the author continues that way), but I found myself being very slightly annoyed that he (Jesperson) treats her (Lane) as a glorified secretary or appendage or finder-out-of-things and certainly not as an equal.  I'm sure it's intended as a nod to Holmes and Watson (or Poirot and Hastings), but since they are male and female, the power disparity was quite noticeable for me.  Not quite annoying, but slightly distracting. Also, the aforementioned odd behavior of some of the characters made me feel off-balance when reading the book.  It didn't quite break my suspension of disbelief when reading, but it was something of which I was often aware.

At 261 pages (Kindle version), there's enough room for the plot to be fairly detailed and the it moves along at a good clip; I didn't find my interest waning or the narrative dragging.  For the denouement, I didn't really buy the motivations of some of the characters which also lent an odd feeling to the ending.  It almost felt as if the author had five or six different plots in mind at the halfway point and picked a likely winner and finished writing that one.  (I'm not a writer, perhaps ALL writers do that to a greater or lesser degree).

It's a tricky thing, writing period dialogue for modern audiences which doesn't break character and also appeals to the modern reader.  The author manages it quite well, and the dialogue, if odd in places, maintains character and form throughout the book.  I enjoyed it.  For readers of modern Victoriana who don't mind giving the romance angle a miss, it's a nice series to seek out.