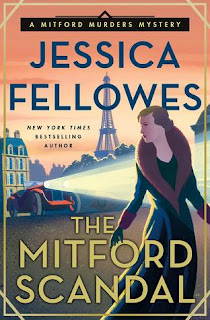 The Mitford Scandal is the third book in the Mitford Murders series by Jessica Fellowes. Due out 21st Jan 2020 from Macmillan on their Minotaur imprint, it's 384 pages and will be available in hardcover, paperback, audio, and ebook formats (some formats available currently).

This is a well researched fictionalized murder mystery woven around a framework of actual historical occurrences and people. This was the first book in the series which I read, and it worked well enough as a standalone for me, though some of the secondary characters blended together and I found myself going back to re-read passages to find out who was married to whom.  The murder 'mystery' was not a big part of the central plot and that and the romance subplots felt a bit tacked on to satisfy genre content.

For readers familiar with the history of the Mitfords and especially Diana Mitford, this one covers several years from 1929 and her marriage to Bryan Guiness onward. The privileged lifestyle and excesses of the moneyed classes are front and centre, contrasted with the privation of many of those who serve and protect them. The story moves from London to Paris to Venice and onward as the bodies pile up. Lady's maid Louisa works to untangle the motives and suspects and solve the crimes against a backdrop of ever-rising fascism and the threats to peace.

I did enjoy the book, the author is talented at her craft. The plotting was well done and moved the action along at a good pace. For me personally, the murders and romance subplots felt tacked on and inorganic. I think my antipathy to Diana Mitford Guiness herself dulled my appreciation of the book as a whole. Definitely a readable historical mystery and a well crafted book.