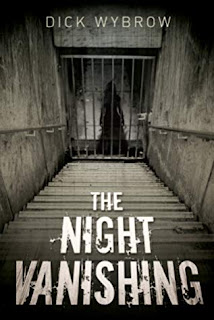 The Night Vanishing is the second book in the Painter Mann series by Dick Wybrow. Due out 16th Jan 2020, it's 329 pages and will be available in paperback and ebook formats. For Kindle Unlimited subscribers, both books in the series are currently included in the KU subscription library to borrow and read for free.

I really enjoyed this weird addition to the Painter Mann (world's only living-challenged private investigator) series. The entire book is a fairly high octane trippy carnival ride from start to finish. The narrative is told in three separate threads, third person omniscient for the ghost hunters & living characters, first person for Painter Mann and the dead in-between people, and first person flashback for the part of the story which takes place in the 1750s (delineated in the chapter headings).
The action was surprisingly easy to keep track of since the writing styles are totally different and it's not mixed up in the same chapters, we get to see the action from multiple viewpoints. There's a certain amount of fluidity in the timelines since time has a different meaning in a lot of the book (it's explained well in the narrative). There is some light horror involved (voodoo, revenge, demonic soul-eating beasties, and the like). There's also a lot of fighting, destruction, and rooting for the underdog to come out on top. Painter himself, like gritty noir PIs in the classic mold, spends a lot of the book getting beat up, stomped on, trapped, folded, and mutilated.

I liked Painter's integrity and sarcasm (he's a smart*ss in the Harry Dresden mold). The world building and entire concept of the in-between is well done and weird (in a good way). The entire effect is somewhat dreamlike and unreal. My only quibble with the writing is that in several of the action scenes, it reads like a stream of consciousness free-for-all which comes across as chaotic and difficult to read. There were some parts which I had to re-read a few times to get the gist of what was happening. It was by no means ALL of the book, just a few of the fights.