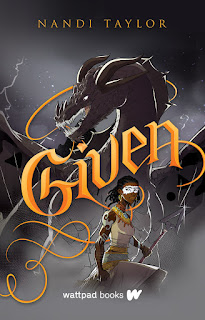 Given is the first book in a new YA series by Nandi Taylor. Released 21st Jan 2020 by Wattpad, it's  352 pages and available in hardback, paperback and ebook formats.

This is a coming of age dragon romance with a young female protagonist who is a person of color. She's being sent to another culture for a year long exchange and hopefully to find a cure for a wasting sickness which has struck her father the chieftain of her people.

There were a lot of things to like about this book. The author is an adept storyteller and the background magic systems and world building are compelling and original. I liked that the main character was a minority, that she was fairly intelligent and ethical, and that she was represented as strong and independent.

My reservations with the book are things which potentially will be in the plus column for many readers. A large portion of the plot revolves around her being 'given' (bonded) to the dragon shifter she's literally just met. It's not insta-love, she doesn't just capitulate at once, which is good, but the romance subplot which might well be a plus for romance fans, found me rolling my jaded eyes at several points. I was surprised there wasn't any overt racism or condescension/colonialism from the other characters, since she's a new arrival from a culture/ethnicity which her hosts, the Cresh, haven't seen for centuries.

All in all, it's a well written YA fantasy with a strong romance subplot and female protagonist.

Four stars, it'll be interesting to read what comes next.