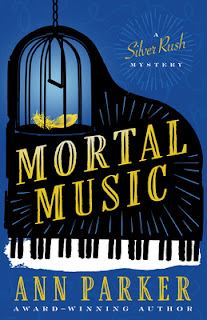 Mortal Music is the 7th Silver Rush historical mystery by Ann Parker. Due out 27th Jan 2020 from Poisoned Pen Press, it's 448 pages and will be available in hardcover, paperback, and ebook formats.

Although shelved as a cozy mystery, this is quite a bit darker and more graphic/ambiguous than most of the genre. It's December 1881 in San Francisco and protagonist Inez Stannert is drawn unwillingly into the orbit of a world famous opera singer on her last tour before she retires. When the diva hears music shop owner Inez play the piano she's delivered for the opera performances, she fires her accompanist and insists on hiring Inez for her few remaining appearances.

There are murders, mistaken identity,  betrayals, theft, double-crosses, and more skullduggery.  The buildup and resolution/denouement were pretty significant downers. I found the plotting slow in places and some of the dialogue was both anachronistic (modern) and stiff. I really wanted to smack Inez's sometime partner/sidekick De Bruijn at several points in the narrative. I found the killing of the diva's pet over the top and unpleasant.

All around, not a very upbeat read, although it is admittedly well written and the author is adept at storytelling. Despite being the 7th book in the series, it works well enough as a standalone. Fans of the series who have already formed a connection to the protagonists will likely find this volume more enjoyable.

Disclosure: I received an ARC at no cost from the author/publisher for review purposes.
at January 26, 2020