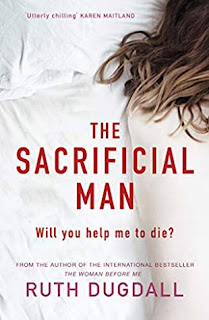 The Sacrificial Man is a dark psychological thriller and the second book in the Cate Austin series by Ruth Dugdall. Originally published in 2011, this reformat and re-release from Legend Press is 288 pages and available in ebook format (other editions available in more formats).

This was a difficult book to read and I've been mulling my review for several days now (so in that sense, it did admittedly make me think about it more than the usual review, and that's interesting). The author is a technically adept writer. She has a sure voice and a deft touch with both descriptive prose and plotting, however... The emphasis in the storyline was way off-kilter to me. The plot revolves around an assisted suicide and nearly all of the scenes feature the woman who helped her lover to die. Cate, the returning character is an afterthought and bland and two-dimensional. I know that she's supposed to maintain her objectivity (her job is to help with sentencing by making recommendations to the court), but I didn't even realize she was supposed to be the main character; the book is told with most of the emphasis around the murderer/euthanist (in 1st person PoV) whilst Cate's interactions are told in third person.

The central themes are dark and make for quite difficult reading. The book contains graphic descriptions and themes of suicide, murder, cannibalism, psychological manipulation, dysfunction, child molestation, abuse, and more. The language is also R-rated.

This would be a good fit for fans of dark psychological thrillers/crime readers. It didn't make for enjoyable reading for me personally, though it's well written.