The Weeping Books Of Blinney Lane 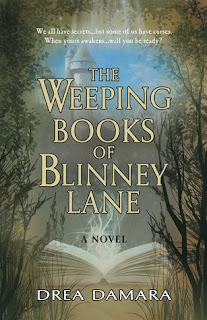 The Weeping Books Of Blinney Lane is the first book in a cross realms fantasy/cozy/light romance series by Drea Damara. Released 27th Sept 2018 by BHC, it's 400 pages and available in hardback, paperback, ebook, and audio formats.

I absolutely love the genre. The world building and setup are intriguing and this could be a solid start to a wonderful series. For me it failed to live up to the premise. The characters are two dimensional and especially in the case of Ricky (the annoyingly surly teen-aged nephew) ridiculously vexing. The characters refuse to communicate with one another in any meaningful way and just stampede from one crisis to the next.

The language is a little rough (mostly to show how nasty the curse they're living under can be). When they use bad language, the curse causes physical manifestations like burning and blistering and welts to appear on their bodies. I found myself wishing that main character Sarah was a lot less damsel in distress and didn't need to be saved by muscular attractive men quite so often. She's apparently been living under this curse for more than a decade and never questioned that her ancestors (and she herself) could literally write other realms into existence. The blacksmith can create magic swords willy-nilly. The author has a lot of fun creating fauna in the fantasy realm such as stroomphblutels, wickrits, roomples, tierumpts, and mucka amongst others.  TWBoBL is written in an alternating third person omniscient point of view which works well for the constantly shifting primary PoV. The changes are clearly delineated and don't cause any confusion, however.....

There were so many instances in the book where new information was just tossed in deus-ex-machina style. There was a fair bit of narrative padding; scenes are developed without ever being mentioned again and I spent most of the book with reader's whiplash. The prose is often so very purple that it was somewhat painful to read. Happily, the later eARC and release versions of the book have apparently been well edited because my version did not contain most of the 'creepy' issues mentioned by other reviewers.

There is a lot of potential here. The author is clearly very creative and the worlds and premises in the book are imaginative and intriguing. I really wish I could've liked the characters more.

Three stars. Would probably work best for YA/NA fantasy readers. There are some potential trigger issues (wrist injuries and skin cuts/welts are one of the manifestations of the curse in the book, as well as near death experiences by drowning being the method to cross back into the 'real' world).