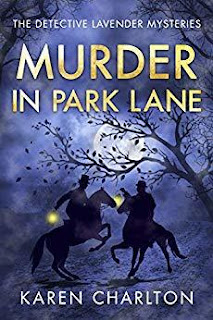 Murder in Park Lane is the 5th Detective Lavender mystery by Karen Charlton. Released 12th Feb 2019 by Amazon on their Thomas & Mercer imprint, it's 313 pages and available in paperback, ebook, and audi formats.

This is a cozy historical murder mystery. 1812 and Regency England is fighting with basically everyone (France, the US, Spain, etc). Lavender and sidekick Woods are called to the scene of a locked room murder in an upscale neighborhood in London. They're soon on the hunt for a murderer (or murderers).  The plot is appealingly twisty and the characters are fairly well defined. There is humor to be found here and some of the interactions are lightly comedic.

I found the author's use of casual endearments somewhat wearying and quite a lot of the dialogue was tough going. I was repeatedly yanked out of the story by anachronistic turns of phrase and if -any- policeman, however highly placed, had dared speak to even minor nobility like Lavender does, he'd have been horsewhipped at the very least. Start to finish, this was a book with modern sensibilities and interactions written for modern audiences. Also, the phonetic dialect was hard going for most of the book. I didn't find it added much verisimilitude and most of the time it just made me roll my eyes internally.

Much of the language and slang used in the book are British and American readers may have to use the 'lookup' feature on their e-readers; but that doesn't present any problems. Possibly worth noting for Kindle Unlimited subscribers, this book is included in the KU subscription library, along with the other books in the series.