Babel: Around the World in Twenty Languages 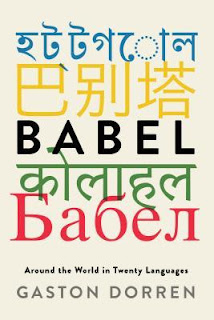 Babel: Around the World in Twenty Languages is an interesting survey of modern linguistics in the form of a discussion of the 20 most widely spoken languages in the world. Released 4th Dec 2018 by Atlantic Monthly Press, it's 361 pages and available in hardcover, ebook, and audio formats. Author Gaston Dorren is a linguist and language writer.

This is a very well written overview of the 20 most widely spoken languages in the world in the modern era. The prose is interesting and accessible to the layperson. Each language gets a chapter discussing the unique aspects of the language as well as its similarities to other languages with common influences. The chapters all have an introductory sidebar with bullet points including the self designated name of the language, the language family to which it belongs, its script/alphabet, grammar highlights, and other capsule previews.

This is not a language primer; there's no vocabulary here, and reading the book won't help you learn any languages. What it does (and does well) is to illustrate in an accessible manner, some of the underlying structures which are unique to individual languages or which they have in common (and which ones).

I found this super interesting and cool. I was also surprised at some of the 'biggest' languages in the world which had made the list. If I had been asked -before- reading the book, I would have gotten about half the languages correct.

This is a wonderful resource for linguistically interested readers and would make a superlative support text for language learners.

Four stars. Super useful and there don't seem to be many general linguistics books aimed at the casual layman; this is a good one.