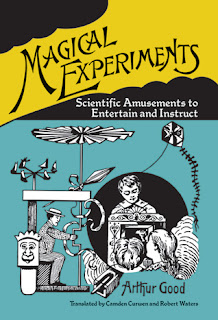 Magical Experiments is an unabridged reformatting and republication of a science manual for young people from 1894. Originally published as Magical Experiments, or Science in Play, this edition due out 12th June 2019 from Dover is 336 pages and will be available in paperback format.

Author Arthur Good was a French engineer, DIY guru, and layman scientist who wrote a weekly column syndicated for publication and was, apparently, something of a 19th Century Bill Nye, the Science Guy. This book is a collection of some of those posts and will teach the reader how to pierce a coin with a needle, balance eggs on the neck of a bottle, spin a plate balanced on a needle, and lots more tricks guaranteed to have parents everywhere covering their eyes (and probably yelling 'What WERE you thinking?!').

For me, probably the best part of the entire book is the engraved illustrations which accompany each experiment. They're sort of surreal compositions with knives and forks balanced from corks in gravity defying positions. 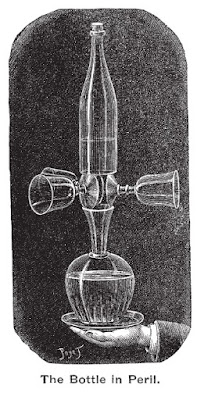 Really cool and fun experiments. Many of these are almost in the nature of 'bar tricks'. The science of -why- they work isn't really explained; for all I know physicists and chemists of the day might have been somewhat hazy on the theoretical basis of why.