Murder at the Manor Hotel 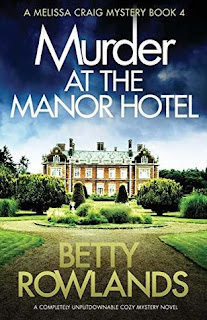 Murder at the Manor Hotel is the fourth Melissa Craig cozy mystery by Betty Rowlands. Originally published in 1994 under the title: Exhaustive Enquiries, this re-formatting was released 20th Nov 2018 by Bookouture, it's 256 pages and available in paperback and ebook formats.

I was undecided about continuing with the series after the third book. I decided to pick this one up because it quite often takes several books for an author to find their pace with a new series and I'm so glad I did.  This is a taut, deftly plotted, entertaining murder mystery with an amateur sleuth whose day job is writing mysteries.  The setting is a stately hotel and the cast of characters is varied and interesting.

I enjoy British mystery as a genre and this one is well written and not too graphic or violent. There's light language use (a few damns, hells, and one 'f'-bomb, used in context) and no sexual violence. For readers from outside the British Isles, the author and slang are British, so expect 'torch', 'bum', 'lift', and 'packet'. It shouldn't prove very onerous for regular readers of mystery or BBC fans.

Possibly worth noting for Kindle Unlimited subscribers. This book (and the rest of the series) are included in the KU subscription to download and read for free.