Murder on the Clifftops (A Melissa Craig Mystery Book 3) 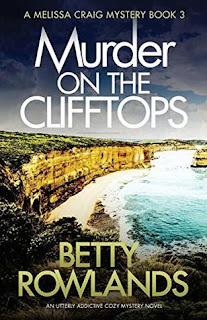 Murder on the Clifftops is the 3rd book in the Melissa Craig series by Betty Rowlands. Released 15th Oct 2018 by Bookouture, it's 268 pages and available in paperback and ebook formats. Originally published in 1993 as Over the Edge, the entire series is being reformatted and re-released in order of publication.

This is an enjoyable cozy series. This one sees titular character, mystery author Melissa, on location in France with neighbor Iris. They're a part of a school/workshop in southern France, Iris as a painting instructor and Melissa doing research for an upcoming mystery she's writing.

The author definitely has a deft touch with historical details and the setting and history are as much a character in the book as any of the human characters. There was a great deal of the history of the area of which I was previously completely unaware. The murders were sufficiently 'bloodless' as to fit with the cozy genre, there wasn't anything to distress or detract from a pleasurable read. I liked the convoluted plot building and the denouement was satisfying.  The language is quite clean and there's very little sexual content at all (just secondhand comments on some characters' personal lives). Nothing gratuitous.

There are elements of a thriller and long shadows from WW2 and betrayals lasting down generations. I did enjoy the book and will seek out further installments.  Though this is the third book in the series, it works very well as a standalone and I had no trouble following the plot or figuring out who was who.

Possibly worth noting for Kindle Unlimited subscribers. This book (and the rest of the series) are included in the KU subscription to download and read for free.