The Book of Peril (The Last Oracle #2) 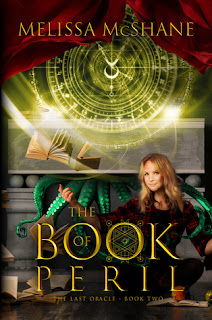 The Book of Peril is the second book in the Last Oracle series by Melissa McShane. Released 3rd July, 2018 by Curiosity Quills Press, it's 231 pages and available in ebook format.

This is an urban fantasy cozy mystery. In my estimation it's mostly aimed at a YA/NA audience, though I found it appealing and well written despite being neither young or new at being an adult (some of my friends and family would likely argue I'm not much of an adult, full stop). The world building is cohesive and well written with a well thought out magical system based on schools/philosophies of magic: glass, bone, stone, paper, etc. Whilst the specific magi can perform magic based on their specialty, all magi can perform some basic tasks in common.

There's a cross-world fantasy aspect of the series which will resonate with readers who like the 'mundane person thrust into a magical world hidden in the real world' trope.  Helena is smart and responsible and vulnerable.

The book does contain a description of a graphic assault and a fair amount of blood and gore, if that's a deal breaker.  (I'm notoriously squeamish especially about violence with injury and I didn't find it too objectionable or gratuitous).

There is an unusual amount of continuity and assumed familiarity in this second installment.  I recommend reading the books in order.

My one gripe is at the very end.  In order to ratchet up the tension, the literal last page of the book has a tear-jerk moment which will have readers who love romantic draaaaaamaaaaa *swooning* (but which I mostly just found annoying).

Four stars (and not just because the coda after the denouement was annoying).