Weaving on a Little Loom 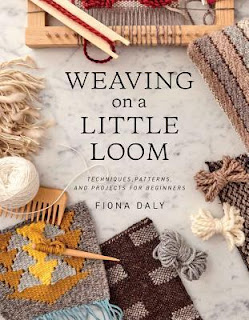 Weaving on a Little Loom is a new tutorial weaving book from Fiona Daly. Due out 18th September 2018, it's 144 pages and available in paperback format.  It's produced by Princeton Architectural Press.

One thing which struck me right away about this book is that it's written in a reassuringly friendly manner.  There's a real 'you can do it' vibe.  This is a complete beginner's book and as such, there's a lot of emphasis on making do, simplicity of tools and not much initial cash outlay.  There's a tutorial for making a cardboard lap loom which will function fairly well for intro projects.

There are a certain number of unavoidable technical terms, but they seem to be introduced slowly and well. There's also a good beginner's glossary at the back and a usable index.

The book is logically structured. The first 18% is given over to an introduction and history of weaving, fibres, tools and warping. The next 40% covers different weaves and some finishing techniques.  Surprisingly, the weaving patterns are not just plain weave and twill, but also include basketweave, herringbone, birdseye and more.  The final third of the book is given over to specific project tutorials.

One of the projects is (of course) the ubiquitous placemat, but in this case it serves as a type of sampler, giving a visual record of several different weaves introduced in earlier chapters.

I found the book more appealing and accessible than the usual (dry!) intro weaving manual.  It's clear and well written enough that I could also see using it in a classroom setting for younger weavers (middle school+), in a senior center or other classroom setting.

Four stars.
Disclosure: I received an ARC at no cost from the author/publisher for review purposes.
at September 14, 2018