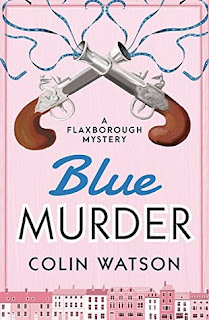 Blue Murder is the 10th Flaxborough mystery by Colin Watson.  Originally published in 1979, the Flaxborough books are being reformatted and re-released by Farrago press so they can be rediscovered and enjoyed by mystery lovers.

These books are extremely dry and the plots are somewhat convoluted and ridiculous.  They are on the whole really wickedly funny and extremely well crafted. They're a combination of murder mystery and a seriously acerbic lampooning of post WWII village life.

I have heard that Shakespeare had the somewhat enviable ability to actually think and write in iambic pentameter.  Well, Colin Watson had an innate and unerring ear for the acidic and wry double-entendre.

There were moments in this book when I found myself yanked out of the story because I had to re-read what the author had said to make sure I understood what he meant.  If the modern reader just skims over the story without putting in a little effort to actually dissect the clever writing, they won't appreciate more than 50-60%.  A great deal of the meaning isn't directly on display.  In that sense also, this book is quintessentially British.  I suspect most modern American readers will have to put in a little extra effort to really enjoy and appreciate these books.

The series was written and set in 60s-70s England and as such they can appear somewhat nostalgic and quaint.

This book in particular seemed to me a little less accessible. I had to work a little harder to really appreciate the jokes.  The plot was the tiniest bit plodding in places and instead of just devouring the book in one sitting, I had to read it in several sessions; I found my interest waning occasionally.  I think most readers who prefer their reading to be easily digested and completely on the surface will probably be annoyed by Colin Watson.  For those discerning readers who don't mind working for their enjoyment, they'll be richly rewarded for their efforts.

I really did enjoy this book and look forward to enjoying the rest of the series.  They absolutely do not make them like this anymore.  Watson's command of English was spectacular.  He reminds me somewhat of Maugham, if Maugham had the naughty sense of humor of a 12 year old schoolboy.