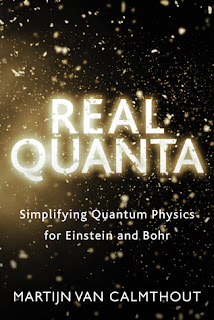 Real Quanta: Simplifying Quantum Physics for Einstein and Bohr is a translation and re-release of the original 2015 Dutch edition: Echt quantum by Martijn van Calmthout. Translated and released in English by Tessera translations and published by Dundurn press, it clocks in at 192 pages and is available in ebook and paperback formats.

There were a lot of things to like about this book.  It's a physics book aimed firmly at laymen, not physicists. There's a lot of history and background here and the author has a deft hand at making potentially dry history both interesting and relevant. There are many many quotes and anecdotes from Richard Feynman (and other physicists and learned folks) and that's wonderful.  I liked the author's take on the fantasy conversation which could happen if you could listen in on Bohr and Einstein chatting at lunch with updated information which hadn't been discovered when they were alive.
There are quaintly appealing line drawings and chapter headers by Wietse Bakker.

That being said, this book is clearly translated and the English version is somewhat awkward in places.  It's not overpoweringly annoying or unreadable by any stretch of the imagination, but it is noticeable. Additionally, science books aimed at laymen often have a tough job being 'enough but not too much'.  I found myself wanting somewhat more concrete information out of this book.  Deciding what to include is a necessarily difficult and limiting job for any technical author and I think he did a good job, I just personally found myself wanting more.  I would unhesitatingly recommend this book to anyone who is interested in science and especially science history.

Enjoyable and easy to read in translation.

Four stars.
Disclosure: I received an ARC at no cost from the author/publisher for review purposes.