The Case of the Deadly Doppelganger 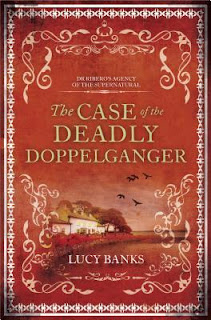 The Case of the Deadly Doppelganger is the second book in the Dr. Ribero series by author Lucy Banks.  Published by Amberjack publishing and released 6 February, 2018, the series is a NA paranormal mystery.  This entry clocks in at an impressive 328 pages and is available in ebook and paperback formats.

There's a popular sub-genre of paranormal mysteries these days which rely on snappy and sarcastic dialogue and ensemble casts.  I can think of a half dozen off the top of my head: The Laundry Files, Bryant & May, Peter Grant, Sandman Slim, Dr. Siri Paiboun, The Garrett Files, and there are so many more.  It's a sub-genre of which I'm very fond.  I was excited to find this example on NetGalley and requested it at once, despite not having read the first book in the series.

Dr. Ribero's Agency is a group of paranormal investigators who deal with hauntings, paranormal activity and other crises which fall outside the purview of normal government agencies.  They're about as low budget and ragtag as it's possible to imagine and largely hapless into the bargain.  Under normal circumstances, the 'underdog' vibe is a good comedic plot device, but in this particular case I found it more sad and annoying than funny.

The characters (lead protagonist Kester included, unfortunately) are universally whiny, irritating and crude.  There are more jokes about bodily functions in this book than I really wanted to count.  There's so much mean sniping and crankiness in this book between the characters (who seem to act like 6 year olds with critically low blood sugar than functional adults) that I just found it exhausting.
My other disgruntlement with the book comes from the 2 dimensional cardboard cutout character stereotypes: the chubby nerd, the b*tchy barbie, the dark inscrutable Russian, the passionate oily Argentinian, the stern schoolmistress-y spinster with a heart of gold, the flakey new-age hippie, the androgynous cowgirl (?!).  The author manages to hit almost all, racial, ethnic and physical.

Given the incredibly enthusiastic reviews this book has gotten (4.1 Goodreads average) my experience of the book seems to be in the minority.  Your experience will likely vary from mine.

The book does read quite well as a standalone entry.  I had no trouble following the plot at all or keeping the characters straight.  It would probably be a good light read, undemanding and somewhat humorous.

Two and a half stars.