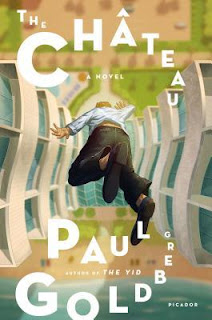 What a strange book!  Author Paul Goldberg's second novel follows up his successful debut The Yid with a blackly comedic exploration of the surreality of life in post-election-Trump America.  William (nee Ilya) Katzenelenbogen has lost his job as an investigative reporter at age 51, his college friend the so-called "Butt God of Miami Beach" aka Zbignew (a cosmetic surgeon), has fallen to his death, so he decides to revisit the scene of Zbig's demise with the vague idea of turning his experiences into a saleable book/movie/source of income.

Since his finances are in the crapper along with his professional life (he doesn't even have the cash to cover his upcoming rent), he plans to stay with his father and stepmother.  He's been estranged from his father for years, ever since his father's trial for fraud against the government for a scheme involving a non-existent ambulette service.

Bill/Ilya gets sucked into one farcical situation after another when he gets involved in his father's revenge and takeover scheme with his (the father's) condo board of directors.  Bill stretches his horizons to unlawful entry and a pile of other felonies in a largely vodka fueled attempt to support and reign in his father to some degree.

The entire book is a sort of morality play.  The writing is stellar, but I'm not nearly as hip or cool as the target audience.  I am very sure it will play well to young urban professionals, especially ones who are more familiar with the stereotypes than am I.

There were several points in the book that surprised an uncomfortable bark of laughter out of me. I also enjoyed the way the author handled the non-English dialogue.  It was comfortable and seamless to read.  I also admire the heck out of the author's ability to do the necessary mental gymnastics to write characters who are philosophically diametrically opposed to one another.  Bill's interactions with his father are brilliantly written (and full of pathos(?)).

Bottom line, not a comfortable read for me, but extremely well written and powerful. Dark, dark, sarcastic humor.  Also worth a note, this book is extremely current.  Not precisely sure how well it'll play 10 years from now.  A lot of the humor involves the surreal and frenetic current news cycle and living in the USA.  If you feel like you've fallen into an alternate dimension every time you turn on the news, this book will tick a lot of boxes.

Due out 13th February, 2018 from Macmillan's Picador imprint.
Four stars for the writing

Disclosure: I received an ARC at no cost from the author/publisher.
at November 26, 2017