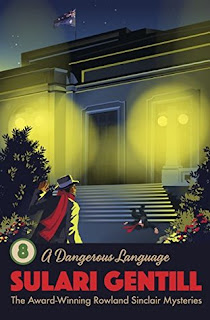 If someone had told me that A Dangerous Language was an authentic heretofore unknown classic golden age mystery, I would have no trouble believing it.  It's beautifully plotted, taut, and meticulously researched. With most modern period mysteries, there's a polite suspension of disbelief which allows the reader to enter the story in whichever time period whilst reading a modern feeling narrative.  This book (and the others in the series) absolutely resonate with the spirit of the 1930s. I was transported.  Terribly trite, but the settings and story really came alive for me.

There is something very quintessentially Australian about this book.  Many (most?) of the wealthy social upper class in Australia still had close ties to England, and that's the case with Rowland.  He's on the outs with his ultra traditional (stuffy!) brother, Wilfred, who disapproves heartily of Rowland's bohemian friends, and feels that Rowland's escapades are willfully designed to embarrass.

Sinclair is affluent, self-deprecating and genuinely likeable.  He's loyal to his friends and dashing and not above a bit of derring-do and can be relied upon in a tight spot. With fascists and anti-communist thugs as well as disapproving family members and an old flame trying to make life difficult, Rowly and company have their work cut out for them.

Such a fun read.  The dialogue is wonderfully written and pitch perfect.  There are sidebar news bits providing current (1934) headlines and backstory history along with an epilogue at the end of the book with real-life backstory, with which I was previously unfamiliar.  The historical sidebars and chapter intros make up roughly 10% of the page content and are cleverly interwoven into the plot seamlessly.

As an aside.  I do think the book could be read as a standalone, but definitely benefits from being read as part of the series.