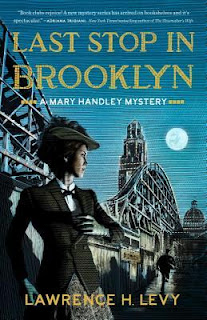 Last Stop in Brooklyn is the third of the Mary Handley Mysteries by Lawrence Levy. Due out 9th January, 2018, this entry pits Brooklyn's first female consulting detective against anarchists, corrupt business tycoons, crooked politicians, a serial killer, and her overbearing mother.

I love period mysteries, especially with feisty female sleuths.  I'm used to allowing a fair bit of latitude for anachronism and style to make books more readable for modern audiences.

The book is thoroughly readable, but had too much superficial snark (for snark's sake) which made it seem very modern when read.  It didn't seem like a period mystery at all, except for references to famous local attractions (like the Elephantine Colossus on Coney Island).  The language was anachronistic as well.  Though the word 'f*ck' was probably in use at the end of the 19th century (1894), it wasn't all that common (according to Wikipedia) until the mid 20th century and having the female protagonist use the word several times felt somewhat jarring to me.

The dialogue and plotting were well paced with several interwoven plot-lines which resolve into a (mostly) tidy denouement. There is a problem with the serial killer plotline (why are the records sealed for those murders??).  It's certainly an entertaining ride, even though the constant (but sadly not historically inaccurate) racism and sexism in the book are wearying.  There are multiple racist and unflattering pejoratives used for black, Jewish, Irish and female persons in the book as well as a surprising (to me) amount of cursing for a period cozy mystery.  I wasn't offended (in context, obviously) but it did yank me out of the story, to some degree.

There's always some risk involved in writing narrative fiction which includes historical characters and verifiable dates and events.  I found no obvious errors with dates, but wasn't thorough in checking.  The characterizations of some of the robber barons was a little two dimensional (again, to my taste).

All in all, an entertaining and well written period cozy mystery with some caveats.  I finished it in two sittings and enjoyed reading it.