Constable at the Dam 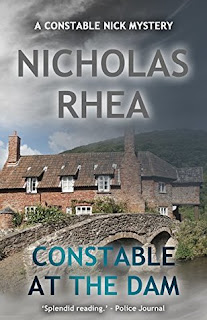 Constable at the Dam is the 21st entry in the Constable Nick mysteries by Nicholas Rhea.  For anyone who enjoys English country village cozy mysteries, this is another addition to what I think of as reading 'comfort food'.  The author inspired and wrote/consulted on the ITV television series Heartbeat and the books deliver more or less the same experience.  If you enjoy Heartbeat (I do), you're virtually guaranteed to love this installment of this sweetly nostalgic series. So many of the familiar characters from the ITV series make an appearance in the books, such as Alf Ventress, Sergeant Blaketon, Constable Nick, Claude Greengrass and many more.

I've heard that these descriptions of the Yorkshire countryside and village life existed only in fiction, but honestly it doesn't matter if they're idealized fiction more than straight fact.  The stories are well written and enjoyable.   There's no super dramatic tension to be found here, no murder, nothing scary or particularly scandalous, and sometimes after a long and trying day, that's exactly what's needed.

Sadly, the author passed away 21st April, 2017, so this might well be the last installment for this comforting light series.  This is a re-release in a new edition, originally published in 1997, and this edition was released 4th October, 2017.

Four stars, I enjoyed it very much.