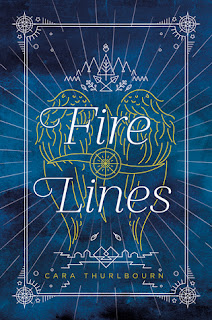 This is a coming of age and quest based fantasy about a young female protagonist facing dire odds against an evil and powerful foe, Mahg.  Published 29 September, 2017, this is a debut novel by Cara Thurlbourn from Bewick Press.

Émi is trying to do the best she can manage after the imprisonment of her father and the demotion of her mother to a slum in her walled and isolated city.  The anti-magic fanatical government and secret police are terrorizing the citizens.  It's during a midnight raid when she turns 17 that Émi's latent magical skill bursts loose, endangering her and everyone around her.

There are some nice twists on standard fantasy tropes.  There are winged avatar/angel type beings along with some nice twists on the standard fantasy and magic themes.  It's de rigeur to have angst and romantic drama in young adult fiction, but it doesn't overwhelm or drive the plot overmuch.  There's enough romance to satisfy the audience without being completely over the top and unbelievable.

There are some technical problems with the pacing and plotting, even though it's a quest driven fantasy, there seems to be overmuch gratuitous 'go here, now over there, now back where you started from'.  The band of adventurers seems less like a band and more like a group of squabbling teenagers on a class trip.  That being said, it is a thoroughly readable book with a cast of relatable characters (for a fantasy novel).
I was impressed by the detail of the world building.  Clearly there are other things going on in the backstory, and I hope the author shares some of those stories with us in future books.  The elephant riders and watchers (winged people) are well written and freshly original.

Fair warning, this is not a standalone novel and ends on a dramatic cliff hanger.  I'm looking forward to future books.

Three and a half stars
Disclosure: I received an ARC at no cost from the author/publisher.
at October 17, 2017