Son of a Midnight Land 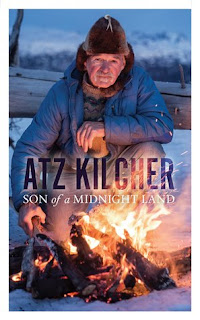 Son of a Midnight Land is a very personal memoir by Atz Kilcher due to release in February 2018 from Blackstone Publishing.  At 330 pages, it's a substantial book.  It's written in a no nonsense gritty unapologetic voice which does not gloss over or minimize his life and upbringing.

Kilcher grew up on a homestead with an often absent, authoritarian and intermittently abusive father and a depressed mother. Life on a smallholding near the arctic circle was fraught and difficult. It didn't help that young Kilcher wasn't interested in, or capable of, the responsibilities thrust on him.  He was a very angry young man.  I very nearly stopped reading this book after about 6% when he describes the circumstances and fallout from being alone on their homestead with sole responsibility for the animals under their care.  I kept reading with the hope that there would be a message of healing or redemption or regret or growth or something in the later parts of the book

There was a message of growth and understanding, but I'm not 100% convinced the often self-inflicted pain of his journey was worth the message for me personally.  It's a brutally honest book.


The author says, "The events described in this book are as true as I can remember. If any omissions or errors were made in the telling, they were unintentional, and not meant to harm or defame anyone mentioned".

The writing is very direct and unflinching and explodes a lot of the romantic notions most people have of 'getting away from it all' and 'living on the land'.  I would recommend this book as background reading for people contemplating a move to a smallholding lifestyle.  It would also be good for background info for people who follow the Discovery series Alaska: The Final Frontier about the author and his family.

Three stars, and a very difficult read (and I live on a smallholding surrounded by wildlife, though I have a day job in the city).