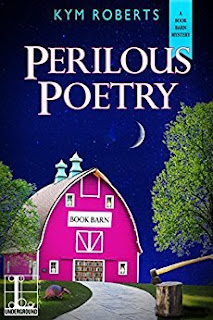 Perilous Poetry is the third book in the Book Barn mystery series.  It's also the first book which I've read in the series and all necessary back-story was written into the story. I didn't have any trouble following the characters or finding out how they related to one another.
The characters are well written and fleshed out.  The story itself is appealing.  There are some quirky characteristics which some readers might find annoying.  Scarlet (the main character's best friend) constantly says O.M.W. which is apparently shorthand for Oh, My Word, even though OMW has more syllables and takes longer to say than oh, my word (or just my word, or heck, change it up and say my stars and garters occasionally).  For a cozy, the murders are fairly graphic.  Not extremely so, or offputting, but somewhat out there.  One of the plot elements has to do with a phone app, and the language and characterizations of the coders/computer geeks bordered on 'too much'.   The main character is also distractingly damsel-in-distress-ish.

It's a cozy mystery romance, so obviously there aren't long passages of difficult dialogue and depressing themes.  It's cozy.  It's lightly romantic.  It's wholesome. I really loved the pet armadillo (and bonus points to the author for tossing an obligatory message in there about people not owning exotic animals, well done).

If I get to a lull in my TBR pile, I'll check out the previous books in the series.

Three stars
Disclosure: I received an ARC at no cost from the author/publisher.