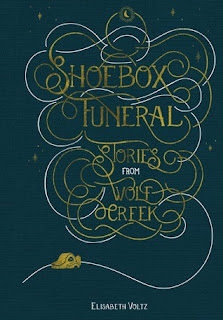 A young adult book by Elizabeth Voltz, from Animal Media, about growing up in a very large family on a farm in rural Pennsylvania. The memoir is a series of short vignettes about different animals who came and went (mostly went) during her life growing up.

I also grew up on a smallholding and I am very familiar with the widespread practice of people driving by and dumping no-longer-wanted animals (generally scared and confused, often with health or behavioral problems) and then driving off in a cloud of dust, 'problem' solved.

The book was well written and beautifully, quaintly illustrated by the author.  Many of the stories are sad and the author's compassion and caring come through.  The biggest takeaway for me from the book was how brutal and awful and often short life can be for vulnerable animals.

I was saddened reading this book (written from the young author's viewpoint through the lens of her adulthood) about how often animals in her world suffered and often died without professional care because it just wasn't feasible to take them to the veterinarian.  There were some viewpoints with which I felt uncomfortable (she was excited about a new cat which came to the farm because it brought a different color pattern and genetics to the constant uncontrolled litters the cats produced).  There were also passages which seemed very sad to me because they led directly to the unnecessary suffering of an animal in her care.  (She refused to euthanize a terminally ill beloved pet because it was devastating to her, but the very ill animal eventually died alone in a snowstorm and wasn't found until the spring thaw).

I really do understand about the realities of living on a farm, and I've been there myself, perhaps that's why this book resonated so deeply with me. I just wish there had been more specific 'spay and neuter your pets and don't dump them at your local small farm' and less of 'this is how fuzzy/spot/kitty met their untimely end'.

Oddly enough, personal aside, I also grew up on a farm terrorized by my grandmother's goose, and though I was an only child (and always wanted a pack of siblings), my parents and grandparents were also mathematicians and physicists and my grandfather reminded me a lot of Elizabeth's description of her grandfather Voltz also :)

Four stars
Disclosure: I received an ARC at no cost from the author/publisher.