Ana and the Cosmic Race 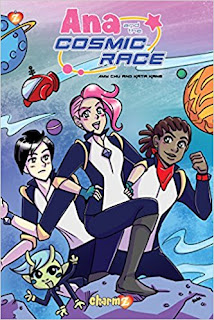 Ana and the Cosmic Race is a shojo comic (school romance aimed at female tween readers) from Papercutz under the Charmz imprint.

I really loved a lot of things about this comic.  There's a romance element, true, but the first volume is full of strong female characters.  There's also a cute slightly madcap sidekick (a shapechanging alien with 4 arms who's Ana's dorm roommate called Zyx), a  mysterious gazillionaire (and in Willy Wonka style, he's giving his empire to the winner of the cosmic race), and a space academy full of supporting characters including Ana's potential love interests Keio Meida and Ekene Botha (see cover).

The art is charming and naive (in a good way), the action and plotting are fast paced.  Yes, it's ridiculous and somewhat sappy, but it is shojo and my test audience (my daughter who is only slightly older than the target audience) absolutely loved it.

The creators also managed to sneak in some information/history along with the entertaining storyline.
Thoroughly enjoyable!