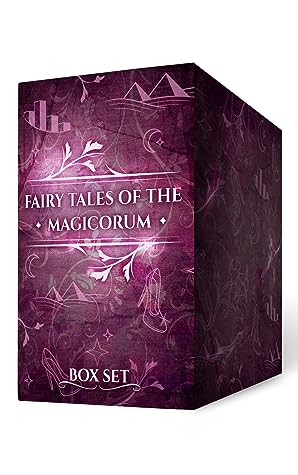 Magicorum Box Set contains the first novels of the Magicorum series by Christina Bauer. The original books included were released from 2017-2021, this reformat and re-release 4th Nov 2021 is 1,220 pages and is available in ebook format.

The books are full of fractured fairy tale archetypes and riffs on classic fairy tales. The happily-ever-afters are not easy to attain and there's a metric ton of crisis and drama and tortured teenage angst and longing between the start and finish.

I'm about 4 decades outside the target audience (older teens and YA), but I am confident that they'll be gobbled up by the readers for whom they're intended. There is a little bit of rough language, but nothing which would raise an eyebrow in the average school hallway. There is also a fair bit of nudity, since lead love-interest Knox is a shifter and they do a lot of clothes shredding, so there's some discussion of his "junk".

The dialogue is sometimes eye-wateringly sarcastic, but again, for readers in the target audience, that will likely be a plus and not at all negative. This would be a good series to binge, since book 8 has just dropped. For fans of Twilight, Marissa Meyer's Lunar Chronicles, and similar, these books will fit the bill.

Four stars for this collection. The individual books for me range in the three and a half to four star range. Likely higher for the target audience.