It's a Wonderful Woof (Chet and Bernie Mystery #12) 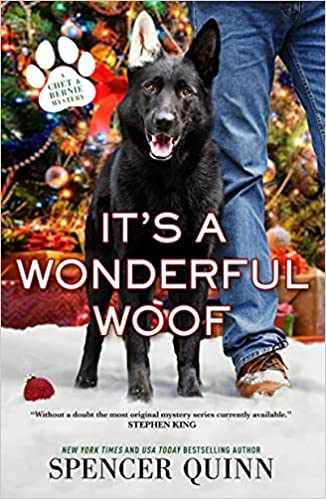 It's a Wonderful Woof is the 12th outing for Chet and Bernie by Spencer Quinn. Released 19th Oct 2021 by Macmillan on their Tor Forge imprint, it's 272 pages and is available in hardcover, audio, and ebook formats. It's worth noting that the ebook format has a handy interactive table of contents as well as interactive links and references throughout. I've really become enamored of ebooks with interactive formats lately.

This is another fun and engaging read starring Chet (the dog) and Bernie (the human) doing what they do best, solving crimes, righting wrongs, and keeping each other (relatively) safe and functional. Although it's the 12th book in the series, all the books work very well as standalone novels. There are a few minor spoilers in the background story if read out of order, but nothing major.

Probably the most unusual aspect of the story is that it's told in the first person point of view of Chet, Bernie's Dr. Watson. Chet's a Very Smart Dog (and a Very Good Boy), but he is a dog and so there are many asides about smelling things and sort of a stream-of-consciousness commentary running throughout. I found it very distracting at first, but after a few chapters it wasn't as noticeable.

For current fans of the series, this is another solid mystery with a cleverly constructed plot complete with a satisfying denouement and conclusion. The language is fairly clean throughout and on the same average as the other books with regards to violence.

Recommended for fans of mysteries with strong animal protagonists, and American PI mysteries. I'm impressed how this series continues to be solidly entertaining without being overly formulaic. Chet and Bernie are the good guys.