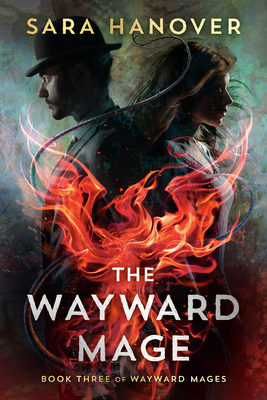 The Wayward Mage is the third book in the YA/NA fantasy series by Sara Hanover. Released 8th June 2021 by Penguin Random House on their DAW imprint, it's 336 pages and is available in paperback and ebook formats. It's worth noting that the ebook format has a handy interactive table of contents as well as interactive links throughout. I've really become enamored of ebooks with interactive formats lately.

This is an epic coming of age adventure with an ensemble cast including a young female protagonist who is brash, sarcastic, independent, and self-sacrificing. Her support crew and found family include a battle harpy, a clan of taciturn dwarves, a not-quite-garden-variety golden retriever, and her mom, who is a would-be academic working on her doctoral dissertation. Her dad's a ghost, her mentor is missing in action, and her boyfriend is off working on a secret mission with the potential to get them all murdered or worse. She's also juggling classes at her local community college and training on the field hockey team in her spare time.

The plotting and action/romance balance is par for the genre and the narrative arc is better than average. There's a fair bit of angsty drama, but I never found Tessa overly whiny or helpless and her relationships are healthy, if often outside the normal human realm. The denouement and resolution are exciting and suitably gruesome, but not extremely graphic or too gore filled. Although it's the third book in the series, it works well enough as a standalone to pick up the necessary backstory during reading.

This would be a good choice for public or school library acquisition, as well as for fans of the genre. Eminently readable and engaging.