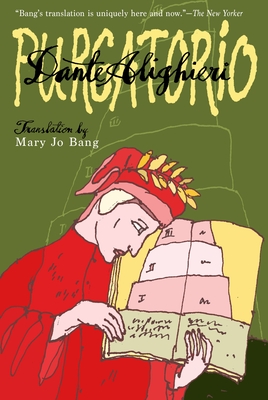 Purgatorio is the second volume of Mary Jo Bang's translation of Alighieri's 14th century Divine Comedy. Originally published in 1320, a year before Alighieri's death, this edition, published by Graywolf Press is 336 pages and is available in paperback and ebook formats.

This is the same epic narrative poem which has been the bane (and sometimes, joy) of students since time immemorial. For 700 years, classics students and scholars have pored over and digested Dante's words. This is a new, understandable, and most importantly, readable translation which remains true to the original as much as possible.

Each canto is first provided in triplet translation.  The prose flows naturally for modern English speakers and in some cases made me grin and even surprised a chuckle a couple of times. The translator doesn't shy away from modern vernacular ("bugger off", "take credit", "...eyes were glued"), and the poem as a whole benefits from it. After the translation, the author has provided copious annotations and notes where subtleties which would've been understood by the original readers has been lost to time, as well as interpretations and explanations of time passage and other mundane information about the setting or characters (there are *so* many characters).

The book includes a good bibliography in addition to the chapter notes and annotations. Despite the improved understandability of this very good modern translation, this is not "easy reading". It requires some degree of engagement by the reader and I would recommend either pre-reading a precis (The World of Dante has some good resources), or reading with a good study guide whilst working through this edition.

Five stars. This is an accessible and good translation in modern vernacular.