What Abigail Did That Summmer 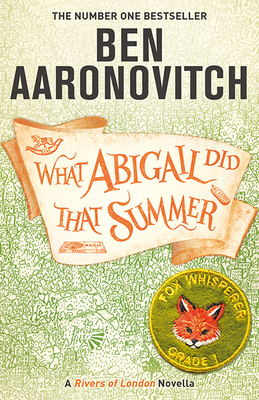 What Abigail Did That Summmer is a spin-off novella in the Rivers of London series by Ben Aaronovitch. Released 18th March 2021 by Subterranean Press, it's 232 page (print edition) and available in hardcover and ebook formats.

This series (and indeed the author's oeuvre full stop) is permanently on my must-read list. He's hysterically funny, often profound, clever, and always an engaging read. Since it occurs outside the main series, this novel doesn't have the same continuity as the others, but by the same token, it makes a fine standalone read. Because it's set in Great Britain (London environs), the slang, spelling, and language constructions are British English. I'm not entirely sure if it's because I was provided the North American advance copy for review, but it's full of asides and footnotes for American English explanations and equivalent phrases. I found some of them clever and tongue-in-cheek, but overall they got quite annoying fairly quickly and broke up the flow of the narrative without adding much.

Main character Abigail Kamara (Peter Grant's young cousin and a burgeoning adept at magic - real magic) is funny, wickedly sarcastic, brilliantly intelligent, precocious, and pretty much fed up with the world's rules. I love her attitude from my safe vantage point away from the fallout which follows her every move. Even in the main series, she's always been one of my favourite characters.

This book reads like a young adult novel and doesn't have the same tone as the main series. I'm admittedly in awe of how the author manages to build a really creepy tension at sub-audible levels without resorting to jump-scares. Despite it feeling discontinuous re: the main series, I really enjoyed it and would recommend it to Aaronovitch's staunch fans, fans of urban fantasy, and lovers of non-fuzzy anthropomorphic foxes.