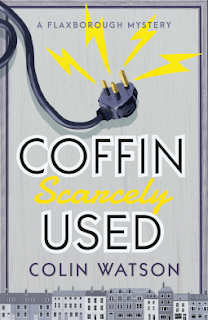 The series, and indeed the author, were unknown to me previously.  The reissue of the series by Prelude/Farrago with new covers is due to begin with this, the first book in the series, on 22 Feb, 2018.

This is a wickedly funny, very gently written and imagined tale.  It is a murder mystery and police procedural, true (with bonus murders, even), but first and foremost it's a wry skewering of village life and social commentary.  Every character is precisely drawn and every seemingly random description written with such unerring humour and precision that the whole is awe inspiring.  The dialogue is spot on, the plotting slowish but in every way germane to the tale.  This is a book to slow down a bit and savor; there are subtleties and humor that must be thought about.

There were a couple places in the book where I, as reader, wondered why in the world the author included something he'd written, only to shake my head later and think 'Well played, Mr. Watson, well played'!

The book never slides into 'mean-ness' or ridicules the stereotypes of which it makes gentle fun.  The book is genuinely funny, and surprisingly very little dated for having been written over 60 years ago.

Four and a half stars.  I -really- enjoyed this. Heartily recommended!

Disclosure: I received an ARC at no cost from the author/publisher.
at February 14, 2018