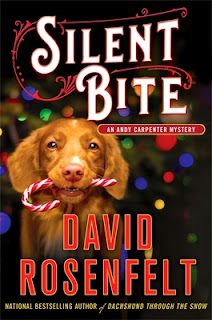 Silent Bite is the 22nd (!!) Andy Carpenter legal mystery by David Rosenfelt. Due out 13th Oct 2020 from Macmillan on their Minotaur imprint, it's 304 pages and will be available in hardcover, audio, and ebook formats.  It's worth noting that the ebook format has a handy interactive table of contents as well as interactive links. I've really become enamored of ebooks with interactive formats lately.

This series is such a fun and reliable read. It's an ensemble cast featuring criminal defense lawyer Andy, his wife (a former cop), and the supporting ensemble of investigators, other lawyers, canines, and an office manager (who is allergic to work), who drive the action. This particular installment is holiday themed and Andy & co. face a challenge trying to prove their client's innocence against a backdrop of gang violence and murder.

The dialogue is rapid fire and often sarcastic; Andy's something of a wisecracking smart alec. The narrative is fast paced and engaging. I wound up reading this one in one sitting (wrecking my bedtime in the process). The denouement was admittedly a little over the top, but I liked seeing Andy and his friends do what they do best. There is some rough language, used in context, and quite a bit of violence (also in context) as the body count rises. There is no sexual content apart from some very light double entendre on Andy's part (aimed at his wife).

Simon Garfunkel (the former K-9 patrol dog), Tara, Sebastian, and other four legged characters make charming appearances (as always), and it's a fun ride to a satisfying conclusion. This entry works well enough as a standalone, all the background info is written in - however, for fans of the series who aren't caught up - there's a pretty major development concerning Andy's colleague Hike Lynch which will be spoiled if you read this one out of order.

Four stars. This is a super fun and positive and very well written light legal procedural with dogs. The series is one of the few I recommend without any reservations to all of my mystery reading friends.