The Light Ages: A Medieval Journey of Discovery 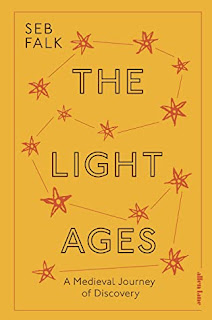 The Light Ages is a beautifully annotated and layman accessible survey of astronomy, mathematics, engineering, science, and learning in the middle ages viewed through the lens of a real 14th century monk called John of Westwyk. Due out 24th Sept from Penguin UK on their Allen Lane imprint, it's ca. 320 pages and will be available in hardcover and ebook formats (other editions possibly available in other formats).

I love reading history, especially of the middle ages. I spent a lot of time in my past, dressed up in medieval garb (or as close as I could get), recreating and demonstrating the nicer parts of the period with my fellow history nerds. I'm also an engineer (day job), and a calligrapher (hobby), so finding this book, which is an intersection of the venn diagram of my life, was a delight.

Dr. Seb Falk has taken what could've been the tweediest, driest, most academic treatise and made it both accessible and human. The subject matter is admittedly academic, there's enough annotation and chapter notation and bibliography to satisfy the staunchest pedant but at the same time, there's a clear and compelling biographical narrative. I'm amazed that there's enough period record to reconstruct the story of Brother John's life in a cold monastic cell in Hertfordshire in the 14th century, but there's enough extant record to create a rough timeline and the author has clearly noted and rigorously supported and annotated where extrapolations are made.

There were so many revelations for me in this book about medieval education, numeracy, literacy of the general population, lifestyle, and more. Throughout the book, where middle English is quoted in the book from period records, it's written verbatim, with an interpretation below it in modern vernacular. There are numerous photographs and illustrations which I enjoyed very much.

Well written, meticulously annotated and researched, with a clear and engaging narrative. The author has a rare gift with written English. Five stars.