Nine Chains to the Moon 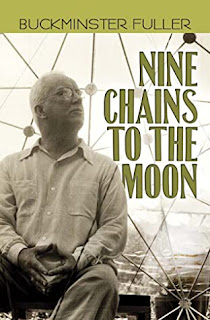 Nine Chains to the Moon is a reformatted and re-released new edition of Buckminster Fuller's 1938 collection of thoughts, essays, and observations. Released in a new edition 16th Sept. 2020 by Dover, it's 384 pages and is available in paperback format (in this edition).

Buckminster Fuller was a brilliant thinker, inventor, and philosopher. This is a wide ranging book containing treatises on such disparate subjects as population, living standards (and how they can be improved), money and monetary concepts, housing (always a big subject with him), scientific thought and exploration, and so many more. The 43 included essays vary in length from snippets to 10-15 pages each.

Fuller's style runs the gamut from cajoling to humorous, to (at least to me) nigh impenetrable. Some of the things he says are bigger-than-life, some are awe inspiring, and it amazed me how relevant-to-right-this-minute so much of the content really is. For being written in 1938, he was preternaturally gifted at forward thinking and extrapolation.

It's worth noting that much of the book contains words which he coined himself when there wasn't an extant word for what he wanted (vacuumizing, earthians, dymaxion, and many more). This can render the text a little more difficult, but pretty much everything was clear from context where neologisms are used.

This is a classic book from a brilliant mind and still quite relevant today. Five stars. This would be a good selection for the reader's personal library, gift giving, or similar.