The Secrets They Left Behind 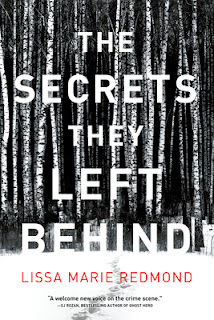 The Secrets They Left Behind is a standalone (?) procedural thriller mystery by Lissa Marie Redmond. Released 7th April 2020 by Crooked Lane Books,  it's 304 pages and available in hardcover, audio, and ebook formats.

This is a well written FBI procedural with a young female protagonist on loan for fieldwork from the Buffalo PD. She has a history with the FBI and the supervisor with whom she's working which is revealed through a series of flashbacks throughout the novel. Her particular appeal for this case (and the prior assignment she completed for the FBI) is that she looks much younger than she actually is.

The story itself is interesting and set up well: the disappearance of three freshman women at a local small-town community college has her placed in the field undercover as a freshman in the same social circle as the missing girls. The plotting and story arc seemed oddly paced to me and moved forward somewhat unevenly however. The author devoted a fair amount of wordage to the interactions of Shea (undercover cop) and her freshman girlfriend group; exchanging clothes, doing one another's hair and makeup, talking about boys, and slagging off girls they don't like.

The book will likely find a willing audience in the new adult market and the strong romance subplot will probably be a bonus for those readers. I will say that the denouement and big reveal were strongly foreshadowed throughout the book and not much of a surprise. I also found my suspension of disbelief hiding behind the sofa over the deux ex machina methods that the author utilized to get Shea out of her predicaments.

The writing is capable. I recommend it to fans of procedurals who enjoy a large dose of romance with their mysteries.  Three and a half stars.

Disclosure: I received an ARC at no cost from the author/publisher for review purposes.
at July 04, 2020