The Scholar's Heart (Chronicles of Tournai #3) 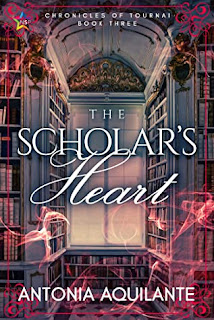 The Scholar's Heart is the third book in a series by Antonia Aquilante. Originally released in 2016, this reformat and re-released 13th July 2020 is ~357 pages and available in ebook format. It's worth noting that the ebook format has a handy interactive table of contents as well as interactive links. I've really become enamored of ebooks with interactive formats lately.

This is an M/M romance with light racy consensual content. There is kissing and touching involved but nothing completely explicit (soaring heights, panting, etc - purple prose, but nothing else). There is a lot of misunderstanding between the characters and so incredibly much unnecessary drama along with a weird infant kidnapping subplot. The denouement seemed forced and the pacing was odd. I also spent quite a lot of the book wanting to whack Tristan with a clue-by-four and lock his revolting mother in the broom closet).

Although it's the third book in the series, I didn't have any trouble following the storyline. The plotting is capable and the writing is quite good. The characterizations are well done and the dialogue is generally good and not clunky. It's just the unnecessary drama and the plot filler which dragged it down for me personally.

I didn't feel much chemistry between the two main characters and the resolution is sweet, but lacked verisimilitude for me. I also felt the fantasy setting was lacking. Yes, the royal family are shapeshifters, and there's a minor (unresolved in this book, presumably the plot of book 4) subplot element about the kingdom's border protection spells weakening, but it just felt like incidental scene-dressing.  I would recommend this one to current fans of the series or fans of drama filled M/M romance.

Three stars, probably 4 for current fans of the series.