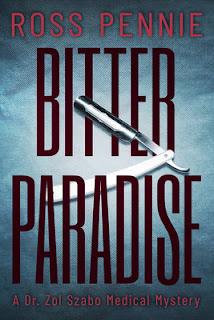 Bitter Paradise is the 5th book in the medical thriller series by Ross Pennie. Released 26th May 2020 by ECW Press, it's 320 pages and available in paperback and ebook formats. It's worth noting that the ebook format has a handy interactive table of contents as well as interactive links. I've really become enamored of ebooks with interactive formats lately.

This is a very well written ongoing series with a returning ensemble cast of characters. It has several loosely related intertwined plot arcs which thread together ever more tightly as Dr. Zol tries to locate the source of a very worrying polio epidemic with his fiance' Natasha and help his foster son work through the trauma of previous injuries in Syria before moving to Canada as a refugee.

I found the books quite graphically violent (the first scene in the book includes the throat slashing murder of a young Syrian barber in front of witnesses). Much of the book is relentlessly grim. However, it's a quite remarkably well written, precisely plotted, controlled, and tension filled read with science based realistic medical puzzles to figure out.

I had not read the previous books in the series, so I struggled a bit with the characters' interrelationships and had some short term issues keeping the plot straight in my mind. It does work well enough as a standalone, but I believe having some background would provide for a smoother, more enjoyable read.

I would strongly recommend this book (and series) to fans of Jefferson Bass, Kathy Reichs, or similar. Readers should know that there is strong language and violence.

Disclosure: I received an ARC at no cost from the author/publisher for review purposes.
at July 25, 2020