Queen of the Unwanted (The Women's War #2) 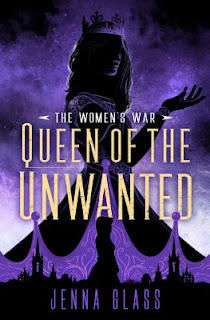 Queen of the Unwanted is the second book in the Women's War by Jenna Glass. Released 12th May 2020 by Penguin Random House on their Del Rey imprint, it's 592 pages and available in paperback, audio, and ebook formats. It's worth noting that the ebook format has a handy interactive table of contents as well as interactive links. I've really become enamored of ebooks with interactive formats lately.

This is a fantasy trilogy which I fear will likely be stamped with a strong feminist label and miss a significant portion of its potential audience. It's a very well written epic saga with strong characters (both male and female) and an overarching slowly developing plot. It's the second in the series (though there's also a prequel), and does *not* work well as a standalone. In fact, my review was delayed because I wasn't able to give the book a good analysis without the background from the first book, so I had to go read that one before revisiting Queen of the Unwanted.

I found the world building somewhat lacking, which is surprising and disappointing in a massive epic doorstop brick of a book (the kind with maps on the inside cover). Women have been brutalized and kept as chattel for centuries, and they've had just about enough, thank you very much. There are three central female characters, one a queen, one a crown princess, and one a Machiavellian abbess of a religious order (whose remit includes religious prostitution).

I probably read more speculative fiction and fantasy than any other genre and I found this one a slog to finish. The plotting borders on glacial tempo. The characters struck me as self absorbed, tragic, or downright unlikable. That the author is quite adept at her craft is evident on every page. There wasn't any clunky or cringe-worthy writing; it's quite readable - I just found it a chore to pick up and finish.

This one struck me as a lot more in the vein of Joe Abercrombie or Brian Sanderson than Octavia Butler, Margaret Atwood, or Sheri Tepper. That's not necessarily a bad thing, but it *is* a thing.

Three and a half stars, rounded up for the undeniably competent prose.

Disclosure: I received an ARC at no cost from the author/publisher for review purposes.
at June 20, 2020