The Moment of Tenderness 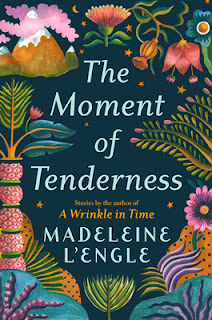 The Moment of Tenderness is a collection of short fiction by Madeleine L'Engle. Released 21st April 2020 by Hatchette on their Grand Central imprint, it's 304 pages and available in hardcover, audio, and ebook formats. It's worth noting that the ebook format has a handy interactive table of contents as well as interactive links. I've really become enamored of ebooks with interactive formats lately.

This book is a collection of early fiction and stories which were reworked into other works by L'Engle. For readers who are only familiar with the author because of her Time series which starts with A Wrinkle in Time, the included stories have a very different (often much gloomier) feel.  I found the quality of the writing variable also, which would be expected for stories curated from several decades of the author's output.

I found the background information and introduction by her granddaughter were interesting and worth a read. The stories themselves, although often poignant and dark, were generally well written and of a high quality. I honestly think that L'Engle's more mature work suffered somewhat because she was typecast as a 'juvenile fantasy writer'.

Four stars, I enjoyed it (but fair warning, there's a lot of angst - much of it apparently autobiographical in the stories).

Disclosure: I received an ARC at no cost from the author/publisher for review purposes.
at May 24, 2020