Familiar Flowers of Field and Garden 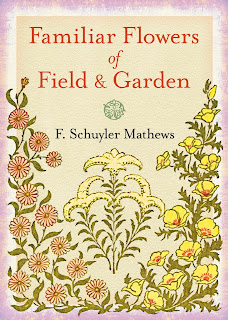 Familiar Flowers of Field and Garden is a reformat and re-release of an herbal by F. Schuyler Mathews. Originally published in 1895, this edition from Dover is 320 pages and available in paperback format (other editions available in additional formats).

This is an appealing and nostalgic look at wildflowers and hedgerow plants by a noted naturalist and botanist from a hundred years ago. The prose is meandering and gentle. It definitely reads like a product of its time, and I found it quite charming. The illustrations are hand drawn, there are no color illustrations or photographs.

The introduction provides a short exposition by the author on the desirability of having more in depth knowledge of the names and particulars of the wild plants which are familiar to most people who spend any time out in nature. It should be noted that some of the classifications of the plants included in this volume have been changed in the intervening century. There is no table of contents, though there is an index included in the back of the book along with a table including names and flowering times, range, color, and other distinguishing features of each plant. The body of the herbal is arranged chronologically by the flowering periods of each plant starting in March and April and progressing through the spring and summer months.

The illustrations are appealingly old fashioned, but I'm not at all sure I would want to depend on them for positive identification (especially since mistaking similar plants can be dangerous). The book is also peppered with poems, reminiscences, and tidbits about plants and the natural environment.

This is a lovely book, not particularly scientifically accurate for the current taxonomy, but would be a great choice for lovers of plant history and natural history.

Four stars. (Five stars for Dover being the repository and champion of so many cool books which would otherwise pass into obscurity forever).