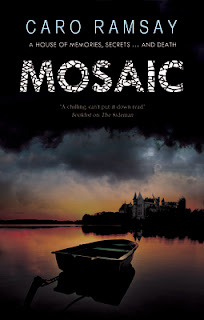 Mosaic is a standalone crime thriller set in Scotland and expertly written by Caro Ramsay. Released 1st Oct 2019 by Severn House, it's 256 pages and available in hardcover, paperback, and ebook formats.

This one has a wonderfully gothic + golden age Christie-esque feel. There is even a manor house (on an island!) and a wealthy upper-class family with a tragic history. The narrative itself is written in alternating points of view, but the characters are so well delineated that it's never a problem keeping them straight whilst reading. The plot is full of tension and red herrings and I read the whole thing in awe of the author's control of plotting, drama, atmosphere. This is a technically scintillating book as well as being entertaining and a good read.

I have read so many thriller/crime books lately which had absolutely been written with film adaptation in mind. The scenes were set up and written as staged and directed for film. This book, refreshingly, was written as a book. The scenes and dialogue were not film sequences.

Really well written, dramatic tension and plot arc work well, characters are interesting and varied, setting is wonderful, the author (in my opinion) bobbled the denouement a bit, but overall the book is superb.

Four and a half stars, rounded up for the writing. One of my best reads for the year.

Disclosure: I received an ARC at no cost from the author/publisher for review purposes.
at October 24, 2019