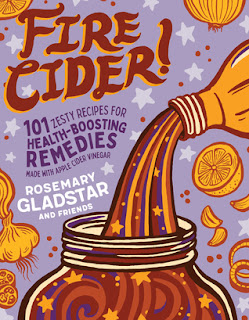 This is an interesting book with some history, some folk wisdom, some chatty background (including some legal drama), and lots of recipes for making and using herbal tinctures and concoctions. The author has a chatty and inviting writing style which is accessible and fun.

The book itself has a logical layout: introductory chapters (including the beginnings of the legal drama) are followed by a discussion of apple cider vinegar and its properties, the origins of fire cider, and some uses, recipes for fire cider and variations, variations such as oxymels tonics and such, and cooking with fire cider.  The book also includes short contributor bios, a metric conversion chart, and an index.

The recipes themselves are arranged with a title, the ingredients (given in American standard units) listed bullet style to the left of the sidebar, and step by step instructions. The ingredients are mostly familiar and easy to source at a grocery store, co-op, or farmer's market. There are many of the recipes which also include short bios or history about the contributors, which I generally found charming and entertaining. In fact, the entire book has a community feel with a lot of shared history and cooperation.

As a denouement to the above-mentioned legal trademark wrangling, on 13th Oct 2019, the US district court in Massachusetts, ruled in favor of the originators of fire cider, and they successfully defended their right to use the name and that it should remain generic and usable by the community.

The book is enjoyable, the recipes are varied and interesting. I also really enjoyed the art and graphics. They're informal and energetic. In fact, a lot of them remind me in a way of the graphics from that hippie icon from a bygone age, The Whole Earth Catalog.

Four stars, I would wholeheartedly recommend it to folks who would like to try apple cider vinegar in their daily routines.