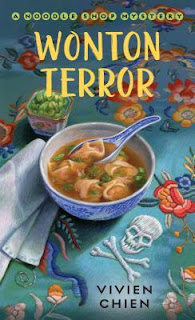 Wonton Terror is the fourth book in the Noodle Shop mystery series by Vivien Chien. Due out 27th Aug 2019 from St. Martin's Press, it's 320 pages and will be available in ebook and paperback formats.

This series was pretty strong from the start. Protagonist Lana Lee is a 20something trying to find her way independently and working in her very close knit family's noodle shop. Over the series, she's become (somewhat) unwillingly entangled in several mysteries. This entry in the series has much the same form as the others, a tragic accident (or was it murder?), lots of back history in her extended family and their families, interactions with her family and best friend Megan, and handsome cop boyfriend Adam.

Despite (or maybe because of) all the cozy mystery tropes, the book was such a fun read. From the punny title, to the oddball secondary characters, to the completely off the wall murder, to the denouement, it's a fun and comfortable read. The author is technically sound enough to make it read well, with a plot driven narrative that doesn't rush or lag; the pacing and tension are precise and controlled. I really care about Lana and her family. They're close (sometimes too close) but they have a good and functional and loving relationship with one another.

I sometimes get a fleeting thought about the setup and whether I should be so comfortable about the setting being written in an Asian shopping center with lots of tourist trade almost like an Asian theme park.  I wonder if I should be bothered that it doesn't bother me. My take on this is: the characters are varied, they aren't depicted weirdly or in an especially racist/stereotypical manner. They aren't all good guys or bad guys or anything like that. They have close, healthy family relationships and in fact, one of the themes of earlier books in the series is that main character Lana is the target of harassment for not being 'really' Asian since her dad is Caucasian. Anyhow, I don't think it's weird, and the series is delightful.

The language is clean (P.G., an occasional damn, nothing worse), there's a little romance, but nothing to scandalize, and the denouement is satisfying. I worry for poor Lana, being mixed up in all these murders. It reminds me of poor Jessica Fletcher; "It's ok, aunt Jess, don't come to the wedding, we don't want anyone dropping dead in the punch bowl"!