Soldier of Fortune: A Gideon Quinn Adventure (The Fortune Chronicles #1) 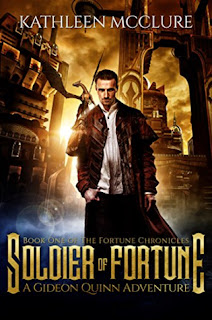 Soldier of Fortune is the 1st book in the Fortune Chronicles by Kathleen McClure. Originally released in 2015, this reformat and re-release in 2018 is 318 pages and available in ebook, audio, and paperback formats.

I was captivated by this book. This is runaway fun on a -huge- space western scale. Gideon Quinn is a paladin... a soldier with a conscience who was unfairly imprisoned for crimes he didn't commit. When he gets the chance to investigate what -really- happened, he manages to get involved in saving street urchins and damsels in distress along with routing the rotten and corrupt government officials who allowed him to be railroaded. He also has a travel-sized dragon. A -dragon- named Elvis. Honestly, the author had me at mini-dragon.  This is also, however, a really well written book. The characterizations are solid. The worldbuilding is impressive, including a self contained, contextually accessible slang and dialogue. It's nonstop action, of course, with lots of explosions, and bar fights, and plasma guns, and shoot outs, and evil powerful antagonists whom I was really really looking forward to watching get smacked down spectacularly.

For Kindle Unlimited subscribers; this title, as well as the much of the author's oeuvre is available in the KU subscription to borrow and download.I binge read the series during a long weekend.

These characters would be wonderfully appropriate for film media as well. It's been a while since I've been totally captivated by an SF/fantasy series. The author writes so visually, it's easy to see the action whilst reading. Please cast this series soon, Netflix or Amazon!

I heartily recommend this book to lovers of space westerns, good-guy action series, and such.  It's very fun escapist reading.  There's a fair bit of light banter (even the bad guys - maybe especially the bad guys). There were only a few places in the story which felt to me to be a little over the top (almost always scenes with the Ohmdahl triplets...their dialogue made me wince), but they were fleeting.

Five stars. I enjoyed this one immensely.

Disclosure: I received an ARC at no cost from the author/publisher for review purposes.
at August 23, 2019