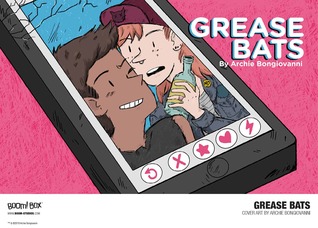 Grease Bats is a collection of comics from Archie Bongiovanni. Due out 3rd Sept 2019 from Boom! studios, it's 304 pages and will be available in paperback and ebook (comiXology) formats.

Grease Bats is a slice of life comic in multi-page panel story format. The drawing style is simple and appealing, with clearly well developed characters who go about their daily lives and interact with the sometimes inexplicable world in which we all live.

I liked so many things about these stories. Little things like the character's t-shirt changes and the angst when a favorite hang-out closes or turns into something you don't recognize (or becomes a freakin' FERN BAR - Lookin' at you Lof's). There were a lot of big things I liked too, like characters who are PoC, that the characters felt genuine to me and not like they had to be paragons of virtue because they weren't straight,. The author/artist manages to impart some grammatical and etiquette advice without resorting to being strident or preachy - preferred personal pronoun use for one thing, acceptable mobile phone use in company for another (huge pet peeve of mine). There were also recurring themes of consent, interpersonal interaction, flirting, dating, real friendship, fighting the establishment, etc. The stereotypical characterizations of the straight characters was a bit over the top, but didn't degenerate into cruelty, so that's cool. I understand that the majority of the target readership doesn't identify as straight, but there are a lot of good points here which could make for valuable reading for CISgender people. There were also a number of typos in the early eARC I received for review purposes. I imagine they'll be edited out before release (they usually are).

There are over 50 self contained short stories in this collection. Like all collections, some of the stories resonated more than others, but they were all readable and some were quite thought provoking. This would make a really good afternoon binge read, or a sampling of a story at a time over a longer period of time. It might also make a good gift for a friend or family member who's coming out or potentially for straight family members who just don't understand the whole 'they/them' pronoun 'thing'. It's not a handbook, it's a collection of light humor whose primary characters are not straight and CIS.

Disclosure: I received an ARC at no cost from the author/publisher for review purposes.
at August 24, 2019